A Memorandum of Understanding (MoU) between the United Nations Economic Commission of Europe (UNECE) and the Geneva Cities was formally approved by the UNECE Executive Committee (ExCom), during its 118th session.

The MoU covers institution-wide cooperation between these two entities, focusing on the upcoming 2022 Forum of Mayors, the implementation of the Geneva Declaration of Mayors adopted during the 1st Forum of Mayors in 2020 and the annual event entitled “In Focus SDG11”.

The Executive Secretary of the UNECE, Ms. Olga Algyerova, underlined that the UNECE benefits from this cooperation with the Geneva Cities Hub, as it supports the participation of local and regional governments and their networks to the work of UNECE.

“The Geneva Cities Hub is a member of the Steering Committee of the Forum of Mayor and contributes in many ways to our activities as a valuable partner” added Ms. Paola Deda, Director, Forests, Land and Housing Division, UNECE. “We are very happy about this MoU, which formalizes the ongoing dynamic cooperation with UNECE that has developed since the establishment of the Geneva Cities Hub” commented Anh Thu Duong, Geneva Cities Hub Co-Director. “That’s a very important milestone with our natural partner, the UNECE in Geneva. We also aim at expanding our collaboration with the four other UN Regional Economic Commissions based in Addis Ababa, Santiago de Chile, Bangkok and Beirut”. 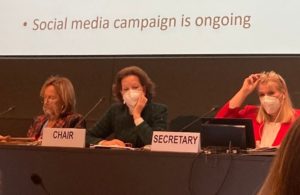 SAVE & ACCEPT
Claim listing: The Executive Committee of the United Nations Economic Commission of Europe approved a Memorandum of Understanding (MoU) with the Geneva Cities Hub